One Roof, Two Churches: Shared Faith of Mexican and Black Catholics During the Segregation Era 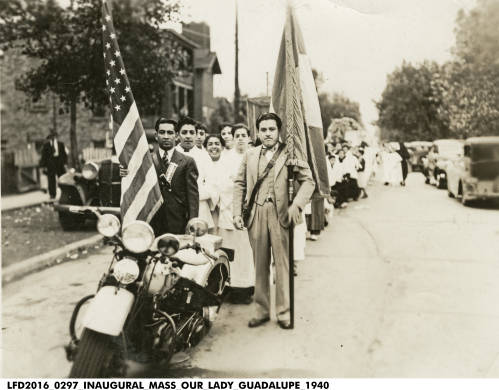 Segregation in all its forms, shaped how and where certain populations lived, shopped, played and worshiped. This is more noticeable in large urban centers, easily supported by population density. A symptom of this is seen in auto-segregation or self-segregation, mostly among ethnic or religious groups. In the Midwest, examples of this can be seen in areas with ethnic enclaves with a long history, such as Chinatown in Chicago or Mexicantown in Detroit.

In Indiana, more specifically in Lake County, steel towns like Indiana Harbor (East Chicago) and Gary saw a diverse mix of ethnic populations from Mexico, Latin America, and eastern and southern Europe. Among this diverse immigrant mix are also southern Blacks who were migrating north during The Great Migration. All were drawn to the industrial lakefront corridor for well-paying jobs. Industries such as general factory work, meat packing, railroads, and heavy industrial jobs in the many area steel mills, helped to economically sustain and grow these communities. While many lived among each other in a cultural mix, some areas saw small flourishing pockets of cultural density. Each carving out physical spaces of belonging. Outside of the home, spaces of cultural belonging existed in pool halls, cultural social halls and clubs, mutual aid societies, and in this instance, places of worship.

Given these carefully established places, rarely did they intermix. Rather, it is hard to discern when or how intermixing occurred. Here are some examples of those creating and breaking the cultural divide.

Indicators of Auto-Segregation: Places of Worship
Research-wise, auto-segregation is most evident in the “Churches of East Chicago” section of the 1940 City Directory, listing more than 60 congregations of differing denominations and cultural or ethnic identity. Presently, the City of East Chicago is only 16 square miles and averaged three to four churches per mile. Both the diversity and density of churches and congregations of this era is remarkable. In 1940, one would not need to be a demographer to see what ethnicities made up the overall population. The city directory listing alone could tell you all that you would need to know.

What’s in a Name: Churches
Prime illustrative examples are three listings of a church named “St. George’s Orthodox”, each one belonging to the Greek, Roumanian (Romanian), or Serbian communities. Three “Holy Trinity” churches belonging to the Croatian, Hungarian and Slovak communities. Perhaps more interesting is “Holy Ghost Church”, one is Greek Catholic, the other is listed as Independent Greek Catholic; not to be confused with Greek Orthodoxy. Lastly, there are two “Church of God in Christ,” both belonging to the Black community, or the term used of this time, “colored”. One was on Melville Street and the other on Block Avenue.

Intermixing within these places of worship is not easily identifiable and we can presume it occurred. There are hints in personal recollections and a scant mention in the local newspaper. One of the early participants of the Latino History Project was Peter Ayala (1931-2021) who mentioned that his padrinos (godparents) were late to his baptism due to a flat tire. Originally the baptism was to take place at Our Lady of Guadalupe Church (Mexican Roman Catholic) in the Block and Pennsy neighborhood. Consequently, he was not able to be baptized at OLG. Later, he was baptized at St. John Cantius (Polish Roman Catholic). He confidently assured me that he may have been the first Mexican to be baptized at this Polish parish.

3855 Pennsylvania Avenue; Our Lady of Guadalupe and St. Jude
While researching and writing, Hoosier Latinos: A Century of Struggle, Service, and Success, I found a casual newspaper mention of the early Indiana Harbor Mexican and Black communities celebrating mass together at Our Lady of Guadalupe Church (OLG) in the Block and Pennsy neighborhood in 1939. While a section of this neighborhood was at one time called “Little Mexico” in the 1920s and early 1930s. It was both densely and diversely populated. In 1926, the Mexican colony founded a Catholic church in the name of Our Lady of Guadalupe, Patroness of the Americas. In early September of 1939, a thankful parishioner who overcame an illness, lit a candle in veneration to Mary. That candle sparked a fire and swiftly damaged the wood structure church. Before the fire, mass times were as bountiful as the size of its congregation. Image from Silver Anniversary, Our Lady of Guadalupe Parish, 1927-1952

This same year the Hammond Times ran a news article about the construction of the new Our Lady of Guadalupe church at 3520-26 Deodar Street, mentioning in one sentence that the Black community worshiped alongside the Mexican community. At this time the Black Catholic community of Indiana Harbor had no church of its own. After a larger congregation was built and the 1926 era wood framed structure church was repaired, it was then given to the Black Catholics of Indiana Harbor, and was consecrated in the name of St. Jude. On Christmas Eve in 1940 its first mass was celebrated. This building served as a historical first – serving as the first Roman Catholic Church in Indiana Harbor for both the Mexican and Black communities.

December 12: Dia de la Virgen de Guadalupe
Presently, Our Lady of Guadalupe Church remains the first Mexican Roman Catholic Church in the State of Indiana. Catholic Mexicans worldwide celebrate Our Lady of Guadalupe on December 12. It commemorates the appearance of the Virgin Mary in 1531 to Juan Diego, a Mexican peasant. Additionally, it serves as a national holiday in Mexico and a hallmark of the Christmas season in Latin America.

Learning of this dual history of shared faith, in the era of segregation in Indiana, was both stunning and a refreshing discovery.

Nicole Martinez-LeGrand is the Multicultural Collections Curator in the Library and Archives division at the Indiana Historical Society. She is an adrenaline seeker of the unique kind; she enjoys the thrill of connecting people to their past. She is the co-author of Hoosier Latinos: A Century of Struggle, Service, and Success