For the Love of the Circus 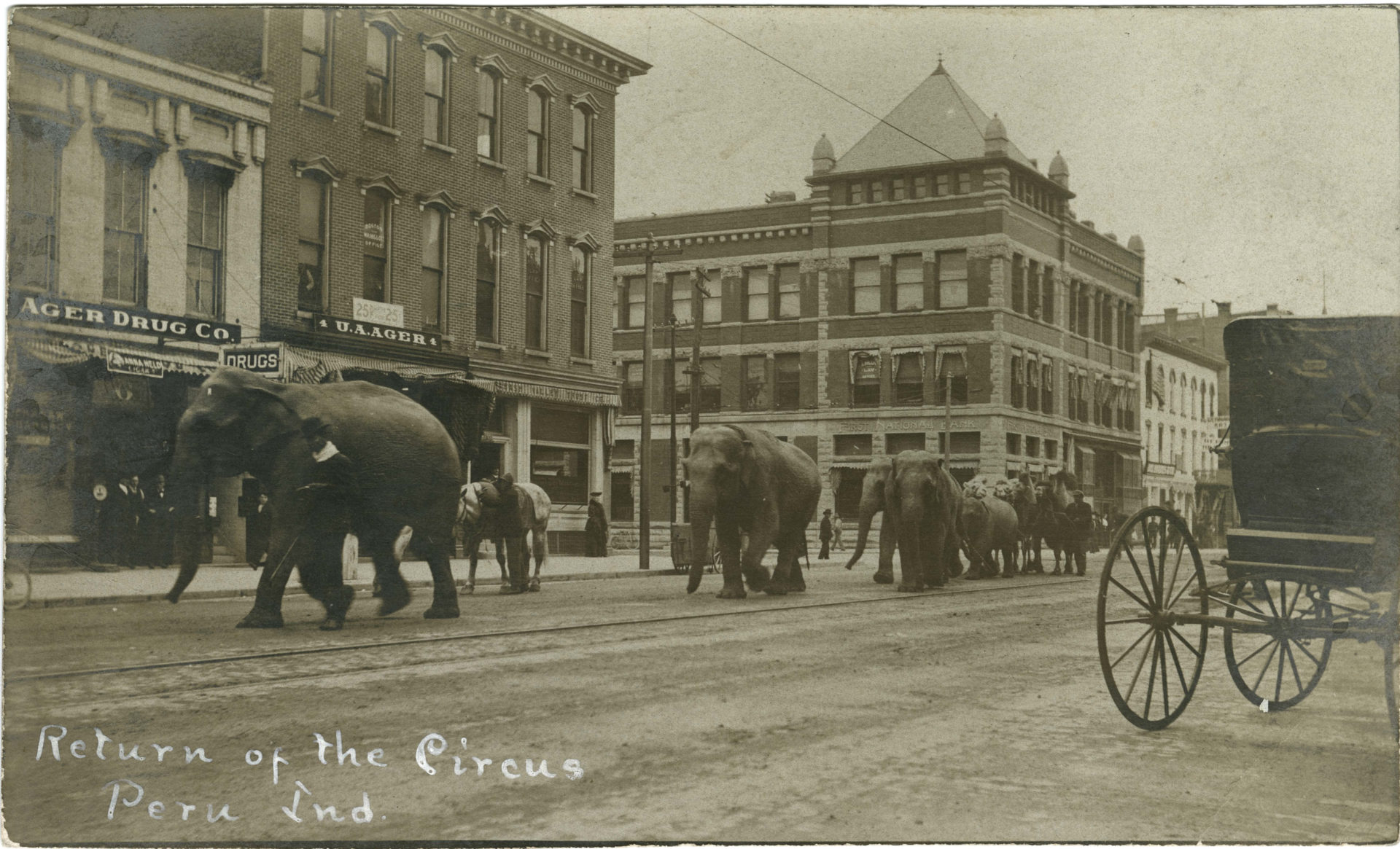 The first official day of winter is December 21. For most people, the circus (of all things!) is the furthest thing from their minds at this time of year. But if you had lived in Peru, Indiana during the 1880s to the 1930s, this was the time that the big circus came home to roost, and for the next few months would open its doors as a free zoo for you and your friends.

In the second-floor halls surrounding the library at the Indiana Historical Society, I am known to my colleagues as the “circus guy.” I’m always looking for circus-related things in our collections that I can work on or highlight. Whenever I come across a collection of letters or diaries of the right time period, I always look up circus dates for the area in which the creator lived to see if they mention Circus Day. Quite often they do. Once I discovered an Indianapolis city ordinance laying out special treatment for a circus spending its winters at Camp Morton. Click here to read my 2019 blog post about that. Head elephant trainer Percy Phillips and an unidentified man stand with four elephants outside of the brick elephant barn. The words “Winter Quarters of the Great Wallace Shows” on the massive wagon shed in the background could easily be read from the road. This photo is one of a series taken at the Wallace winter quarters soon after the Wallace and Hagenbeck titles were combined in 1907. (Indiana Historical Society)

Due to this reputation of mine, when a box of unprocessed reel-to-reel tapes containing interviews from Peru, Indiana surfaced in our collections several years ago, it was promptly brought to my attention. As a quick refresher, Peru was the original home of the Hagenbeck-Wallace Circus, one of the Ringling Brothers’ greatest rivals. In 1921, a corporation was formed around it, which included more of the most famous circuses of the time, including John Robinson and Sells-Floto. Throughout the ‘20s, this American Circus Corporation, headquartered in Peru, fought tooth-and-nail against the Ringling “circus trust,” and earned Peru a reputation as the “Circus Capital of the World.” Today the Peru winter quarters is a National Historic Landmark and the home of the International Circus Hall of Fame.

The tapes in question contain interviews conducted from 1959 to 1962 with Peru locals who either worked on the circus or had some personal connection with the men who ran them. One particularly important interview was with Harry Sarig, the personal secretary of one of the circus executives. It was Sarig who devised the complex accounting procedures needed for the circuses in the twentieth century. Such first-person information is extremely hard to come by today, and I jumped at the chance to spend my little free time painstakingly transcribing the creaky, muffled, and sometimes squealing tapes. It took me several years to transcribe the handful of interviews that we were able to digitize. But recently I decided it was time to release the transcripts into the world, where I hope they will shed some new light and reveal new details about the Peru shows. They are available by appointment in our reading room as M1486, the Ferol Meeker Peru, Indiana Circus Oral History Transcripts, 1959-1962.

And if you or your family have anything along these lines that you think we would be interested in, please drop us a line!