What Is a Hoosier? 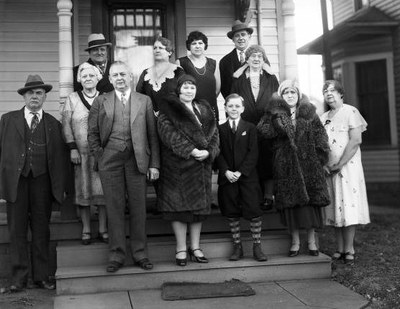 It’s safe to conclude the Hoosher and Hoosier nickname adopted by Indiana residents and for them by their nearby neighbors was derived from the dialect term (probably traceable from England) not uncommon among southern immigrants to Indiana and the Ohio Valley several years before [John] Finley arrived and penned his famous poem [The Hoosier’s Nest].

Although the term implied a frontier roughness just beyond the most recently settled and “civilized” regions (which of course were always moving west), its subsequent widespread acceptance in the 1830s and 1840s was definitely good-natured, if not independent-minded, in meaning then and thereafter.

Although the old double-sense meaning still occasionally surfaces (usually among newcomers or visitors, linguistic researchers, or those who may enjoy making fun of Indiana residents), it remains embraced in its modern appellation as primarily positive. Moreover, the word is a regional nickname, like many others whose precise origins do not necessarily burden the modern, continued appellations.

Perhaps one of the more eloquent conclusions was offered by Walter Havinghurst in The Heartland (1962) when he observed: “Whatever its origin, the name of Hoosier has had a lasting appeal for Indiana people and has acquired a quite enviable aura. For more than 100 years, it has continued to mean friendliness, neighborliness, an idyllic contentment with Indiana landscape and life.”

It appears that [researcher] George Blakey’s observation still holds that Finley’s creative effort “helped define Indiana identity” and contributed to a “stereotype that the state has accepted affectionately, if not realistically – that of a rustic, rugged, individualistic land.”

Excerpted from “The Meanings of Hoosier – 175 Years and Counting,” an article by Steve Haller, senior director, IHS Collections, which appeared in the Fall 2008 issue of Traces.

<Previous Story The 500 and the Photographer
>Next Story You Are There: Eli Lilly at the Beginning
Facebook Comment
Recent Entries