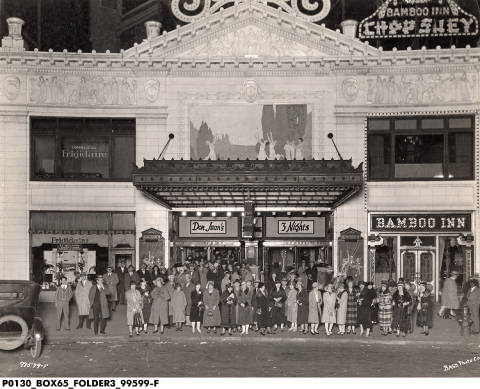 Our online digital photo collections always serve as inspiration for research pursuits of all sorts, including blog posts. While researching trivia question ideas in our W.H. Bass Photo Company collection, I came across a photo from 1926 of a group of people standing in front of the Circle Theatre building (now known as the Hilbert Circle Theatre). Directly to the right of the crowd is a sign perched on the roof of a two-story restaurant called Bamboo Inn. The signage advertises the ubiquitous Chinese-American dish, chop suey.

Thinking that I would only find newspaper ads for the restaurant, my own assumption would only prove wrong. Articles found noted a pre-prohibition era nightclub, famed resident orchestra, robberies, meat scandal, multiple dissolution of partnership/ownership, and society articles where this restaurant served as a prime locale for luncheons for clubs and the Indianapolis elite. If you wanted to see and be seen, you were at the Bamboo Inn. If I could go back in time, you would find me on the second floor of this restaurant at midnight, watching a floorshow staring Helen Edes, with bandleader Larry Price in the fall of 1933. But the story the Bamboo Inn begins much earlier, more than 100 years ago in 1918.

The Indianapolis News reported on July 13, 1918 the planned grand opening of a Chinese-American Restaurant at 39 Monument Circle in the Circle Theatre Building. It advertised a resident orchestra stationed on the first floor, bamboo decor and a balcony built between the first and second floors. This would make the present-day Indianapolis Symphony Orchestra not the first famed resident orchestra to inhabit the historic Circle Theatre building.

The first owner is presumably a man by the name of George Gong, who managed the restaurant. By the fall of 1919 the ownership changed and was under the management of a Chinese-American group out of Chicago called Tuen Hip Wey who also managed another restaurant by the same name in Chicago. This was common practice of the early the Chinese-American restaurant scene in major cities, pooling of capital funds and serving as a corporation to open opulent banquet hall style restaurants.

Like the restaurants of Chicago, the Bamboo Inn of Indianapolis served lively evening and late-night musical entertainment, Americanized traditional Chinese dishes in addition to standard fare of chicken and steak dinners. With the new ownership, the bamboo décor was quickly replaced with cherry and marble finishes, adding private dining booths, a concept that was noted as new to the Indianapolis restaurant scene. Henry Shinohara was the new head chef and formerly worked at Chicago’s infamous King Joy Lo Restaurant (est. 1906) and was an instructor of cooking at the U.S. Army’s Camp Grant outside of Rockford, Illinois. Under his culinary direction their new menu promoted Chinese-American and French cuisine. Newspaper ads for the restaurant would continue to boast about the cleanliness of their kitchen and invite them to be inspected at any time. Yae would continue to be an employee and was mentioned in a 1927 article that early in the morning he came face to face with a hammer wielding man in Bamboo’s kitchen. Yae would countersuit with a meat axe, only to be rescued by another incoming employee.

Given the late hours, evening entertainment and opulence of the Bamboo Inn it was a target of multiple robberies. They would later expand and formalize their evening entertainment by outfitting the second floor as Club Orientale in 1932, a year or less before prohibition ended. This 250 people capacity club offered Thursday-Sunday midnight floorshows, a rotation of bandleaders and dancing into the early morning hours. Club Orientale would only last a few years due to the Depression. Their lease would run out in 1946 and would take a short residence in the English Hotel; demolished in 1948. That same year there was dissolution of partnership with some of the group owners and relocated off the circle to 138 N. Meridian Street. In the 1950s, it would move further north to 2133 N. Meridian Street. In 1953 they were still advertising weekend live music entertainment with NBC Network artist and organist, Mary Jean Miller.

The Bamboo Inn would officially be sold in 1961 and renamed Jong Mea. Bamboo’s last known owner and longest serving employee was Henry Guy Chung, a native Californian who came to Indianapolis in 1919 from Chicago, with his Polish wife and two daughters. Henry would have been part of the Tuen Hip Wey restaurant group, who took over ownership that same year.

The next time you are buying Indianapolis Symphony Orchestra tickets at the box office in the Hilbert Circle Theatre, you are standing at the front entrance of what would have been the famous Bamboo Inn.