The Early Beginnings of the Mexican Consulate in Indiana: 1907-1927 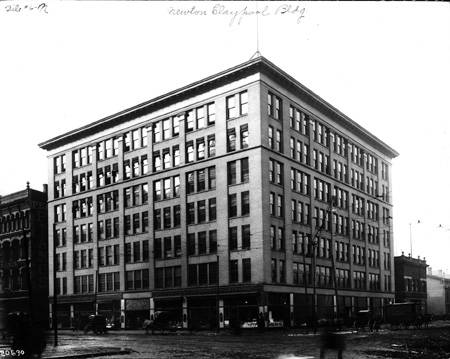 In November of 2002 at Union Station in downtown Indianapolis, Indiana’s first and only foreign consulate would open its doors to support Mexican citizens. However, this is not the first time in Indiana’s history that there existed a foreign consulate office in Indiana. On that day, no one realized this history began 95 years earlier.

On October 7, 1907, Colonel Russell Benjamin Harrison of Indianapolis formally accepted his nomination from Mexican President, General Porfirio Diaz, to serve as vice-consul of Mexico. The exequatur was delivered by U.S. President Theodore Roosevelt. Russell was from a prestigious political lineage as the son of President Benjamin Harrison, great-grandson of President William Henry Harrison; also served as governor of the Indiana Territory and great-great-grandson of Benjamin Harrison; signer of the Declaration of Independence. Additionally, he served during the Spanish-American War (April 21-December 10, 1898) and during that time was appointed the inspector general of Puerto Rico. His 1907 acceptance letter to General Porfirio Diaz was published in Indianapolis newspapers and surrounding areas. His office was in the Newton Claypool Building at 144 N. Pennsylvania Street. Foreign vice-consular positions held by U.S. citizens in the United States were to maintain commercial interests of both countries and their citizens. Services provided were much scaled back compared to the services provided today, merely acting as an intermediary.

Porfirio Diaz is credited with modernizing Mexico, largely by inviting foreign investment into the country. This created a deeper chasm among social classes in Mexico while still maintaining some Spanish colonial practices since its independence from Spain in 1821. From 1910 -1920 the Mexican revolution carried on throughout Mexico. Newspaper mentions of Russell’s consular role in Indianapolis would be few and only as an intermediary in domestic issues involving Mexican citizens in Indiana. In June of 1908, there were reports of President Roosevelt ordering U.S. troops to the U.S. and Mexican border and later into Mexico. Harrison assured locals in the local newspaper that if they had Hoosier friends or investments in Mexico, that they would be safe.

In June of 1916, the Indianapolis News newspaper splashed the headline “One Hundred Mexicans Live in Indianapolis” with Russell saying that the colony has diminished in recent years. Following with the statement that it would be good to maintain positive relations with Mexico until the revolution is over, saying:

“Mexico will need everything. The entire country must then be rehabilitated, and it will need farm machinery, automobiles and practically everything else, and there is no reason why Indiana should not get much of that trade.”

In November 1916, following a series of violent events in Mexico, Russell published a letter sent to General Carranza, claiming he will step down from his position unless assurances were made to ensure the safety of U.S. nationals in Mexico. Many other Mexican consulates would close due to the advancement of the revolution and the instability of Mexican presidential leadership. Indianapolis’ Mexican vice consular office would remain open. In January 1917, J. de P. Sores, consul of Portugal at Chicago traveled to Indianapolis to appoint Russell as vice-consul to Portugal. There would only be four other Portuguese consuls in the United States; Boston, New York, Chicago, and San Francisco. Russell would still be vice-consul of Mexico but reported that the Mexican government abandoned him. A new Mexican constitution would not be official until months later in February of that same year. Russell would continue to serve dual vice-consular roles to both Mexico and Portugal until 1927. Russell passed away on December 13, 1936, at the age of 82 in Indianapolis.

Nicole Martinez-LeGrand is the Multicultural Collections Coordinator in the Library and Archives Division at the Indiana Historical Society. She’s an adrenaline seeker of a unique kind and enjoys the thrill of connecting people to their past. Her primary areas of research are of Indiana’s Asian and Latino, Latinx and Hispanic communities.