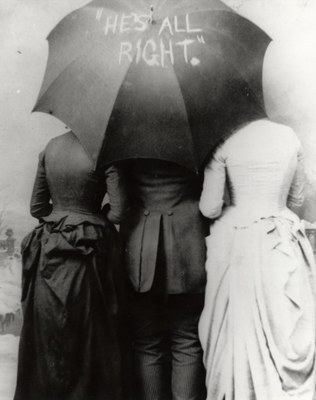 Tippecanoe and Tyler, too!

Ah, campaign season. The Iowa Caucuses are over, and New Hampshire is just around the corner. But so often, the campaigns just feel as if they’re all talk and bumper stickers and hats lots of hats.

But recently, flipping through the pages of The Indiana Book of Trivia, I came across this fun bit of information. Part of Benjamin Harrison’s 1888 presidential campaign slogan was “Roll along. Roll away. Keep the ball in motion.” No, he didn’t send campaign donors buggy stickers or straw hats with that written on them. There was no hashtag or Twitter handle. Instead, he had a giant metal-framed campaign ball twice a man’s height with this and other slogans written on it that supporters rolled along the National Road from Maryland to the Harrison home in Indianapolis. Newspapers of the day indicate that it had a 14-foot diameter and was “greatly applauded as it rolled along.”

I don’t know about you, but I’d volunteer to be part of the team responsible for transport. Can you just imagine watching the ball roll by like tweets and updates in your Twitter and Facebook feeds? And since there is nothing new under the sun, Benjamin Harrison’s campaign gimmick was a riff on his grandfather’s campaign for president in 1841. William Henry Harrison was Indiana’s first territorial governor and served as president of the United States for a mere 32 days before succumbing to pneumonia. The phrase “Keep the ball rolling” supposedly stems from his campaign in which 6-foot paper balls were rolled from town to town.

As campaigning goes on and on and we yearn for the days of a more refined political discourse, let’s just remember there have always been quirky gimmicks that will entertain generations to come.