In preparation for our Mapping Indianapolis panel this Saturday, I thought it was timely to highlight one of my favorite new resources available in the library – the H.B. Fatout Co., Herbert Bloemker Co., and Ernest R. Hamilton Co. Surveying Books collection. The collection includes more than 50 sketchbooks surveying Marion County, beginning in the 1880s. Early surveying sketches like these served as the basis for map creation. They also explain our built environment – why lots are shaped the way they are (and even some buildings upon them!), why an alley turns or ends at a point, etc. Tracing these changes can be useful for urban historians, environmental historians and historic preservationists alike. Additionally, these early surveying methods relied on a lot of math, equations and early tools, which are detailed in the sketchbooks.

The plat below depicts the area bounded by Madison Avenue on the east, the railroad tracks on the west, Palmer Street on the south and Orange Street on the north. The strip of land plays an important role in the commerce and development between two historic neighborhoods, the Old Southside and Bates-Hendricks. 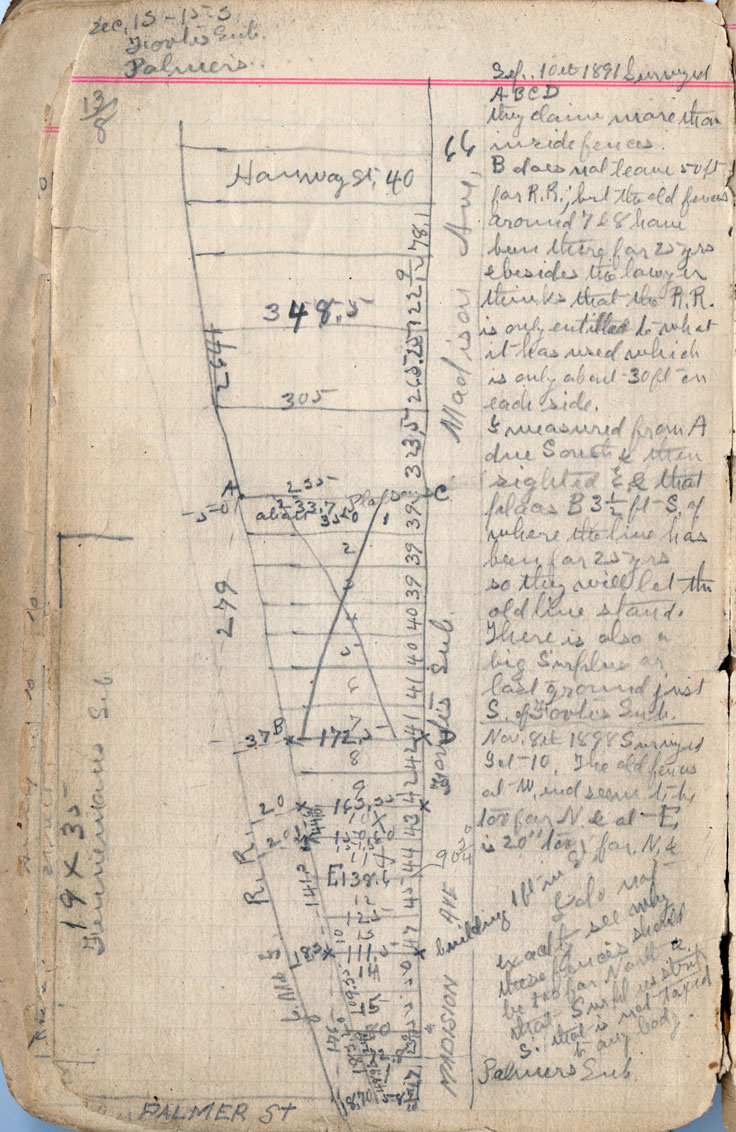 Another map shows the triangle of land on the north side of Virginia Avenue to Lexington Avenue on the northern edge and College Avenue on the eastern edge. From the survey we can see that Lexington Avenue was once named “Huron Street” and College Avenue was once “Noble Street.” (Although Noble Street still exists south of Virginia Ave., in the Fletcher Place/Holy Rosary neighborhood, once College Avenue has terminated.) The alley behind the main strip of lots has been partially vacated over time, but the shorter alley still services the small strip of residences to the northeast.