What Could Have Been: White River State Park But do you know what really makes me happy in the archives? Finding building plans that never came to be. So when I stumbled across photographs of the original White River State Park model while processing the McGuire Photographs collection, I was mesmerized by how many design concepts were incorporated into the first version of the plan. Located between the State Government Center, IUPUI and along both sides of White River, the historic industrial grounds that eventually became White River State Park were waiting to be redeveloped in the 1980s (as seen here and here). But did you know that the park we see today was not the original plan? The first park proposal envisioned a multi-purpose facility, including museums, amphitheater, trails, landscape features, amusement park, zoo, monument plaza, boardwalk with shops and restaurants, and marina for boating and other water activities. Initial planning commission talks centered around the themes of food (agricultural history and food production) and sports. Here’s a close up of the proposed amusement park area. The landscaped area in the foreground is a large parking lot. Behind the amusement park is the Indiana Tower and the “Grand Entry.” 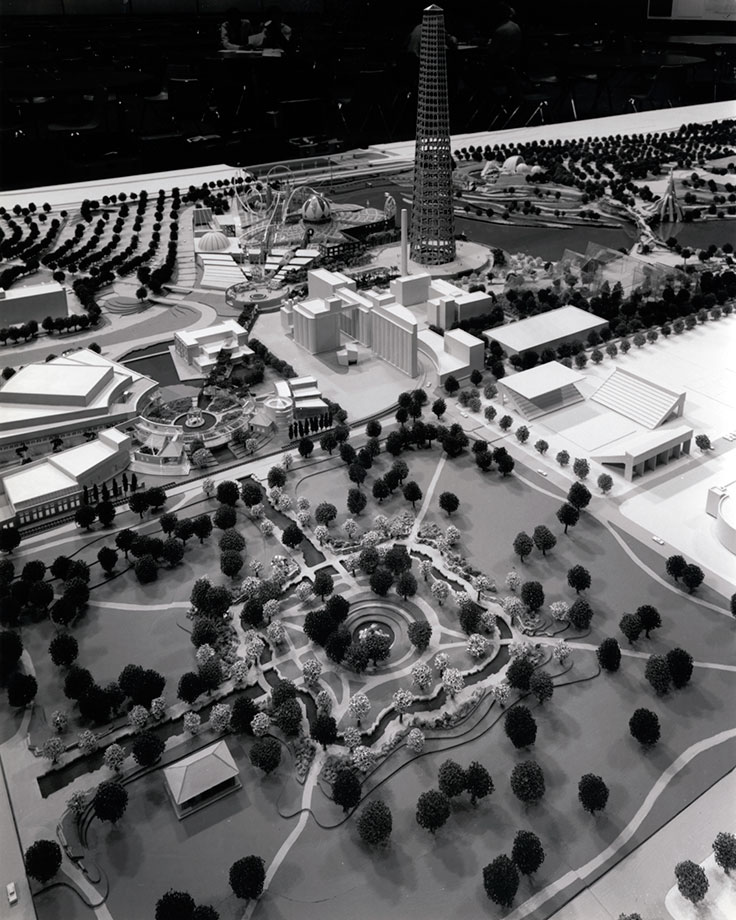 This image shows Military Park in the foreground, with new landscaping features, including incorporating the canal into the park. Directly south are a series of buildings called the “Performing Arts Quadrangle.” To the west of that is a few historic buildings of the Acme-Evans Mill, which were ultimately torn down.

The park grounds on the western side of White River did develop into the Indianapolis Zoo and White River Gardens, but the east half of the park looks wildly different today. There are no amusement park rides or boardwalk entertainment, but elements of the landscaping and plaza did come to fruition. The museums, outdoor amphitheater and baseball stadium also materialized. Drawings of the Spires and water activities from the White River Park master plan, 1981.

Jordan Ryan is the coordinator of the Indianapolis History Project at the Indiana Historical Society. She spends her free time debating if Star Trek or Star Wars is better.