So Who Did It? It seems no place is safe. Last Friday saw a murder here at the History Center during this year’s Whodunit? program. Luckily, we had more than 150 detectives on the case to help us put the clues together, interrogate the suspects, and solve the 90-year-old Evansville crime. 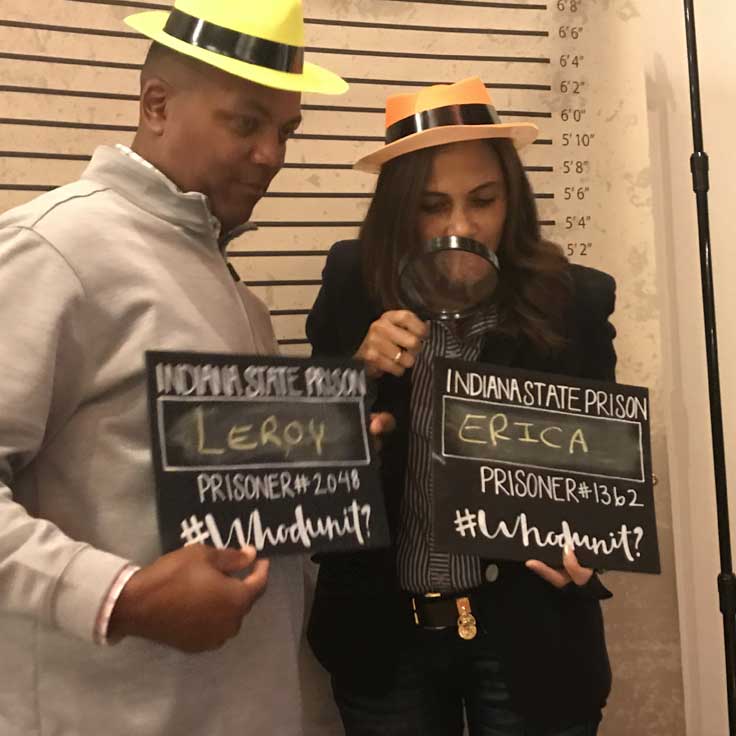 The victim in question was named William Bohannon, a lawyer of questionable repute from Evansville, Indiana. Handsome, suave and courteous, Bohannon was a “man of the world.” His law practice, mostly dealing in divorce cases, was thriving in Evansville in 1928. But Bohannon also had a bit of a reputation as a ladies’ man and a philanderer. His reputation followed him from his student days at Indiana University, where his “trysting place” was known as Bohannon’s Hollow.

On Friday, September 14, Bohannon’s wife Lillian was enjoying a comfortable night at home when she heard her name called. She opened the front door to find her husband slumped behind the wheel of their Hudson, two shots in his chest. Puzzlingly, bullet holes were missing from his vest and jacket. She drove him to Deaconess Hospital, where he died the next day. Under further investigation, detectives found corn stalks under Bohannon’s car. Early Saturday morning, a dead body was found on the edge of Henry Schwartz’s cornfield, four miles outside of town. Out of the way and not often patrolled, the location was next to a well-known rendezvous location for couples having secret affairs. Clutched in the dead body’s hand was a rope and evidence of a struggle. Tire tracks in the field matched the tread of Bohannon’s car. Police linked the two crimes together and set out to find the connection.

The unidentified body was brought for preservation to Klee and Burkhart Funeral Parlor, where hundreds of Evansville residents filed through to speculate on his identity. Close to 5 p.m., a young woman identified him as Frank Mills, a recent arrival to Evansville who was renting a room from the Meador family. Mills came to town with his friend Frank Paisley from Detroit six weeks prior, looking for work. After finding temporary employment at a furniture factory, they were laid off. Further searching of the Meador home found a revolver matching the caliber that shot Bohannon in Paisley’s room.

Within a day of being detained, Paisley confessed to the crime. He and Mills had gone out to the Schwartz cornfield, 10 feet of rope in-hand, to rob a couple. They were waiting along a ditch when Bohannon and a blonde woman parked near their hiding place. Ambushing the car, they ordered Bohannon to get out. After an argument and tussle, Bohannon grabbed the gun from his car and shot Mills. In return, Paisley shot Bohannon. During this time, the mystery girl was apparently screaming at the top of her lungs. Bohannon then stumbled back to his car and drove through the Schwartz cornfield to his home. Paisley returned to the Meador home, hid the gun and played cards with the family. Paisley was found guilty of the sentenced to life in prison at the Indiana State Prison at Michigan City.

The question remains, who was the mystery blonde girl in Bohannon’s Hudson? We never found a definitive answer, but our money is on Norma Fueger, Bohannon’s young stenographer.

Looking for more details on this murder? Check out this article written by then Evansville Police Chief Harry Anderson from True Detective October 1930. It reads like an episode of a true-crime podcast but 1930s style. And watch for our next installment of Whodunit? coming in October 2019.