When I was growing up, a local family had converted a barn loft into a basketball court. “Barnball” became a frequent afternoon excursion, with trick shots and heated competitions. Over the years I have found that basketball can be played almost anywhere in Indiana and that no matter the venue, competition is always heated. From playgrounds, to gymnasiums, to arenas, and even barns … Hoosiers will always find a way to play ball.

In the coming weeks all eyes will be on Indiana as we play host to many incredible basketball games. With games being played across the state, Indiana will get to highlight many of the storied arenas and gymnasiums that have been home to so much Indiana basketball history.

Our library collection is filled with many images of basketball sites throughout the state … some legendary and some not so famous. However, all contribute to the lore of Indiana basketball. Below are a few of my favorites.

Opened in 1971, Assembly Hall (now known as Simon Skjodt Assembly Hall) seats 17,222 and is home to the men’s and women’s basketball teams of Indiana University.

In this six-minute video, you can watch original footage from ca. 1971 in Assembly Hall’s earliest days. Completed in 1928, Butler Fieldhouse (later renamed Hinkle Fieldhouse) is one of Indiana’s most iconic and storied basketball sites. Not only home to the Butler Bulldogs, Hinkle has hosted many high school championship and tournament games. Since it opened in 1939, the Indiana Farmers Coliseum has been home to high school, college and professional teams. In the early 1940’s it was the site of the state high school basketball championships, including this image of Fort Wayne Central and Lebanon in 1943. It has also been the home to the ABA Pacers and IUPUI Jaguars.

Multi-seat arenas aren’t required for Hoosiers to find a way to shoot basketball as seen in this 1927 image from Ladywood High School. 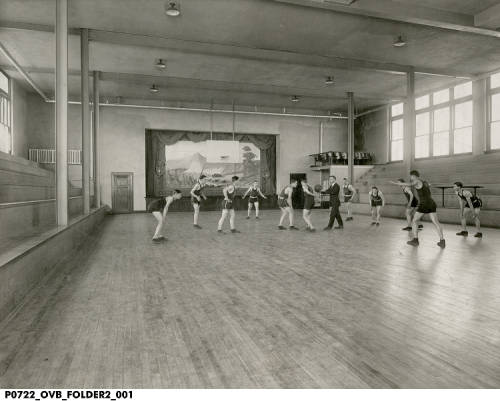 High school gymnasiums have been an integral part of community life for towns across Indiana. With consolidation, many are no longer in use but the stories – and legends – are still remembered. Completed in 1974, Market Square Arena was the home to the Indiana Pacers for many years. Closed in 1999, the building was demolished in 2001

There are so many basketball sites in Indiana that this list barely scratches the surface. Visit our Digital Collection for more images and information on Indiana basketball!

Suzanne Hahn is Vice President of Archives and Library at the Indiana Historical Society.